Just the other day, we featured Perry Watkins' "Wind Up" mini car, plus his extreme lowrider, the "Flatmobile". Both impressive.

But somehow I missed Watkins' most delightfully absurd vehicle.  "FastFood" is a 130 mph Queen Anne dining room table, complete with the fine silver. 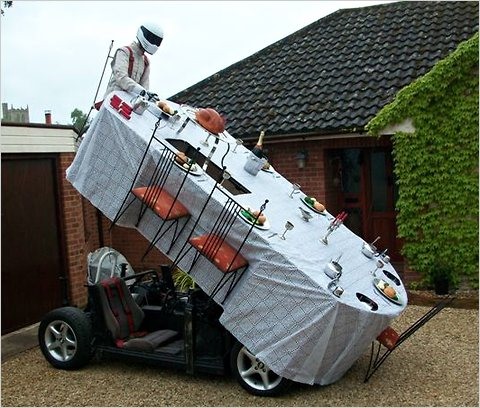 "The 47-year-old's average speed in FastFood was judged at 113 m.p.h. as he twice circled the track, losing not so much as a napkin. His speed peaked at 130. He's awaiting the Guinness determination on his try.

'I'm a shoe repairer by trade'" Mr. Watkins said in a report on Worlds Fastest Furniture Web site. 'I just started off tinkering with bicycles, mopeds, bikes, and progressed to cars. I'm completely self taught.'

He said the table is capable of a top speed of 160 m.p.h. No specs on the coefficient of drag rating, although the teapots, the chicken and the dummy dinner guest — who looks a lot like the Stig from 'Top Gear' — probably don't help."

See it in action; read up on the story and the build. 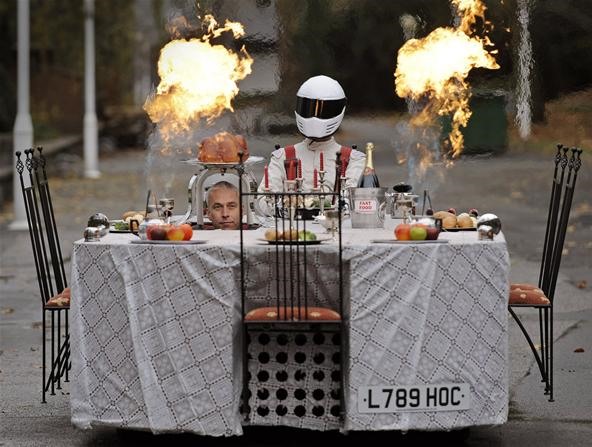 HAHAHA AWESOME! When i'm going on my next date i'll chose this table xD

But can it drift?

His head under the turkey is a nice touch.