The Panzerbike. A monster bike like no other. The Frankenstein of all motorcycles. This big boy has an 800-horsepower engine, and weighs in at 4.74 tons.

Harzer Bike built the colossal WWII German motorbike with sidecar using a slew of materials, including the bonnet from a Soviet truck and the engine from a diesel T-55 tank. Although nicknamed the "Panzerbike," Panzer tanks were actually German-made and the T-55 was Soviet-made.

Don't miss the video below. 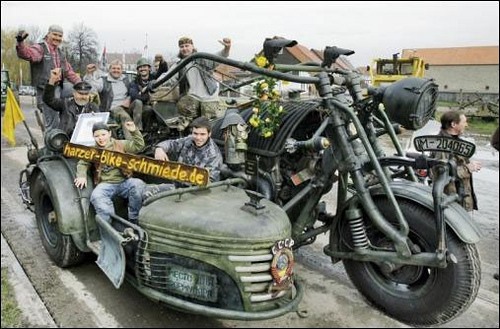 It’s Black Friday week on WonderHowTo! Don’t miss out on all of the big sales in the Gadget Hacks and Null Byte shops. And if you’ve been wanting to take some classes without going into debt, check out our best deals on online courses for a variety of skill sets. Don’t miss out on these huge discounts: