The upcoming Shell Eco-Marathon promises to unveil vehicles that will blow current fuel economy standards way out of the water. California Polytechnic State University is one of the most promising contenders, with a vehicle that gets 13 times the 230 mpg General Motors promises the Chevrolet Volt will deliver (plus, the Cal Poly car doesn't even use batteries!). 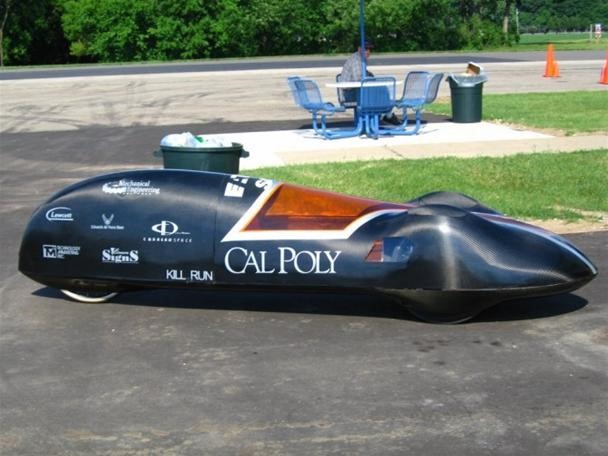 "The Cal Poly Supermileage Team is working on two cars: the Black Widow (shown above), which took first place in the 2007 Eco-Marathon and second place in 2008 and 2009, and a new three-wheeler for the competition's Urban Concept category.

While the Urban Concept vehicle is still under construction, the team has continuously improved the Black Widow since its creation in 2005, slowly ratcheting up fuel economy from 861 mpg to the current 2752.3 mpg. They've done it by shedding pounds like a Triple Crown jockey on a celery diet in a steam room. At a mere 96 pounds, the car weighs slightly more than a Lagerfeld model, has a rock-bottom drag coefficient of 0.12 and can reach a blistering 30 mph with a modified 3 horsepower Honda 50cc four-stroke engine. That's right — three horsepower."

How'd they do it? Read all about it on the Cal Poly Supermileage Blog.

the car black widow sound like a good idel question seeing it only reach a top speed of 30 mph do you have to have a licend to run it on the streets ?? and next question is is it a one or two person car >: