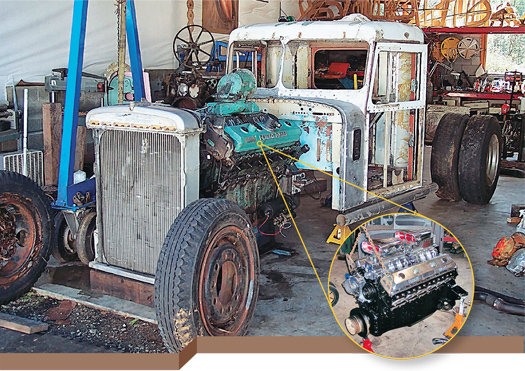 ...into this truly breathtaking beauty (who goes by the name of Piss'd Off Pete): 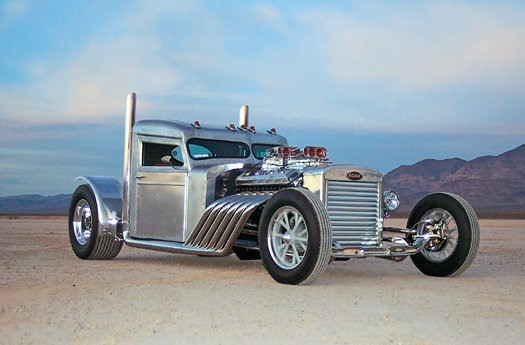 Here are the specs, via PopSci:

"Grubb opted for thinner tires in front, so they wouldn't dominate the look, and used a wider set at the rear. After chopping the truck cab down to fit the shrunken chassis, he spent about five months grinding steel tubing and other structural pieces. He also added new aluminum plates all over the exterior, and he nickel-plated numerous components at the front and back."

"The truck engine had a safety device that could cut air intake to shut down the engine in an emergency, but Grubb didn't like the way it looked, so he covered the blowers that help force air into the engine with 'butterflies' common to the 1970s dragster world. These red, circular hinged covers give Pete a demonic look, and if the motor begins running on its own oil—a danger in racing a car with this type of diesel engine, where it keeps on revving until it blows—he can close them up and strangle the engine."

"Piss'd Off Pete wouldn't pass emissions tests, but the massive V12 gets an estimated 15 miles per gallon—green for a hot rod, at least. The reason: Grubb says the engine was designed to pull 150,000-pound loads, but his car weighs in at a mere 8,500 pounds...

The car's future is as a display piece, but if set loose, Grubb says, "it could cruise down the freeway at 70 miles an hour at only 1,500 rpm."

Now That is one Bad ass rod!!